Your Source For Health Foods

Your Source For Health Foods

Visit us to supply your healthy life!

Visit us to supply your healthy life!

We Truly Care About Your Health

We take a holistic approach to preventing and reversing disease. We offer a variety of alternative health products that treat you, not your condition. We believe that you are not living your best life possible, unless your mind and body are completely healthy.

Our goal is to provide alternative medicine that will reverse and prevent disease. Our results have proven that, the best way to heal the natural body is naturally without relying on industrial produced pharmaceuticals.

Our Promise to You

We understand that not all products work for everyone. We carry a large amount of products that can work for your individual health needs. You can count on us to have the highest quality alternative health products on our shelves.

2019 Trends and Highlights: A Strong Year for Healthcare Equity Markets

Healthcare shares soared in 2019, with the NASDAQ Biotechnology Index (NBI) and the XBI S&P Biotech ETF advancing 24.4% and 32.6%, respectively, generally in line with the S&P. At the same time, volatility for the broad market (VIX) and NBI index fell by about half to 12.5, a historic low. Among NBI companies, performance varied greatly by market cap: Those with market caps greater than $10 billion rose 11% on average, while the average gain for $5 billion to $10 billion companies was 25%. In general, the lower the market cap, the higher the gain. 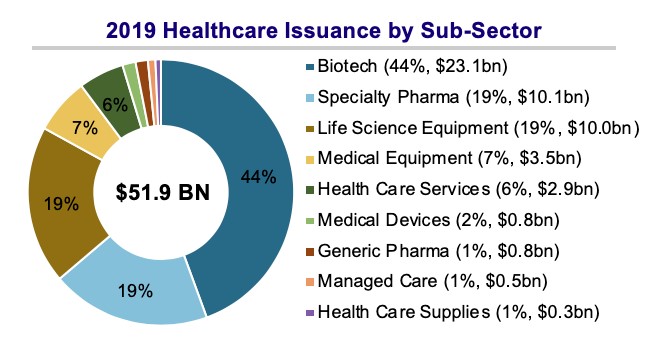 The IPO market was open to life-sciences companies across all clinical stages. Early-stage life-sciences companies with promising therapies in development or in Phase 1 trials represented 33% of IPO activity, in line with 2018’s 32%. However, in a reversal of 2018’s pattern, late-stage companies had a higher IPO market share (40%) than intermediate-stage companies (27%) as investors displayed discipline and caution. Parsing IPO activity by therapeutic area, investors favored companies focused on genetically identified diseases and particular cancers over companies that specialize in immuno-oncology, gene editing and gene therapies. Neurological and central nervous system drug developers continued to draw strong investor backing.

Looking Ahead to 2020: Four Predictions for Healthcare Capital Markets

The healthcare sector enters the year riding a wave of improved fundamentals, and we expect the momentum to carry over into 2020. Here’s our forecast:

COVID Collaborations Spotlight the Symbiotic Nature Between Pharma and Biotech

The global need to find therapies that treat COVID-19, and vaccines to protect against infection from SARS Cov-2, has shone a spotlight on the ability of the drug development industry to mobilize quickly and in scale. The speed of the coordinated global response to the pandemic highlights the relationships and partnering infrastructure built over the past decades between large pharmaceutical companies and smaller biotechnology companies.

The biotechnology industry, which in 1992 claimed just under 200 publicly traded companies, has more than tripled – particularly of note given contraction of the broader publicly traded universe. This can be reflective of the largesse of the IPO market we see beginning in earnest in 2013 (measured as number of IPOs/year above the average of the past 10 years – 36 vs 13.3), which we attribute in part to demand by investment specialists seeking alpha in a largely low interest rate environment.

With the biotechnology industry growing in number, technologies and therapeutic focus, R&D partnerships became fertile ground for supplementing big pharma’s pipelines, particularly in the face of large blockbuster patent expirations. For investors, the positive effects of a partnership with big pharma – cash and leverage from a strong development partner – can be recognized in expanding valuation and rising stock price. For patients, pharma’s desire to explore high-risk, high-reward biotechnology means greater resources – from development to regulatory – that can be singularly applied to new therapeutics.  The net of it is the potential for breakthroughs that improve current standard of care.

Access to capital and resources are not fool proof, however, as the uncertainties of drug development have schooled companies and investors throughout the history of drug development. No therapeutic area or type of drug is immune from trial failure and this also applies to small and large companies, as well as partnered drugs. Take, for example, non-alcoholic steatohepatitis/liver disease in 2019, where failures occurred for both large and small companies, as well as partnered and non-partnered drugs. Here we refer to emricasan’s Phase II failure and selonsertib’s Phase III miss. Such failures have served to reinforce the benefit of partnerships, as the high-cost failures diminished big pharma R&D investment returns. This is particularly evident in oncology, where innovation has accelerated rapidly, resulting in compressed time intervals between first-to-market and next-to-market drugs and where clinical failure rates are at the top of the industry.

The acceleration of technology and drive to improve upon already significantly improved patient outcomes in many cancers over the past 20 years has pushed therapeutic development to new realms. The recent launch of chimeric antigen receptor T cell therapeutics (CAR-T) that start with the patient’s own immune cells as the foundational building block to create treatment shows the power of new technology in the pursuit of abating cancer. And today, CAR-T has paved the way for other engineered technologies – such as tumor infiltrating lymphocytes (TILs), engineered T Cell Receptors (TCRs), next generation CAR-T cells, and natural killer cells (NK cells), holding the potential to further the paradigm of cancer treatment.

These therapies are in various stages of human trials, and are pushing the boundaries of the healthcare system’s framework for implementation and cost. Today, patients suffering from certain types of blood cancers can, for instance, benefit from the innovative CAR-T treatment. But these therapies are expensive, require extensive lead time for manufacturing and hospitalization for administration, necessitating an alternative commercial paradigm compared to traditional small molecules and monoclonal antibody therapies.

Large pharma faces diminishing returns from their R&D investments and patent expirations for their blockbuster drugs. Their need for growth continues to fuel multi-billion-dollar M&A and licensing deals in the industry. Consolidation and partnerships between pharmaceutical and biotechnology companies are likely to continue as a greater number of FDA-approved products share lineage with biotech (over 50% of pharma’s approved drugs today originated elsewhere, versus one-third ten years ago). In 2020, eight tie-ups between large pharma and biotech, including Gilead Sciences’ (GILD) recently announced acquisition of Immunomedics (IMMU) for $21 billion and Bristol-Myers Squibb’s $13 billion purchase of Myokardia (MYOK) were announced. This year has seen large licensing deals between Arcus Biosciences (RCUS) and Gilead, and Gilead and Jounce Therapeutics (JNCE), where both companies are working in immuno-oncology, and MorphoSys (MOR) and Incyte (INCY) for the now-FDA approved drug Monjuvi for diffuse large B cell lymphoma (DLBCL).

In 2019, with Bristol-Myers Squibb’s (BMY) $74 billion acquisition of Celgene (which had already acquired CAR-T innovator Juno Therapeutics), Bristol is set to become a competitor in the emerging oncology cell therapy field, where Gilead gained a toehold with its previous acquisition of Kite Therapeutics. Although the dust has yet to settle on the broader commercial opportunity of these new therapies, it is clear that access to innovative therapies across portfolios is in demand, particularly as competition creates dislocations between products, as it has happened between Bristol-Myers Squibb’s OPDIVO/YERVOY checkpoint inhibitor franchise and Merck’s own checkpoint inhibitor KEYTRUDA, whose global sales have been a core driver for Merck’s overall revenue growth.

The development of groundbreaking therapeutics is expensive, frequently in excess of $1 billion, and thus access to capital to continue to fund this growth is important. 2020 has been a strong year for capital raising with IPOs accounting for over $10 billion in capital raises and secondary equity offerings, or follow-on deals for more than $34 billion in capital, to fund development.

The urgent need to develop therapeutics and vaccines for COVID-19/SARS-Cov-2 has fueled capital raising for biotechs working in this area and has also highlighted partnerships and collaborations between pharma, biotech, and the government, the latter of which has made $10+ billion in funding available. In May of this year, Gilead’s anti-viral therapy, remdesivir, now known as VEKLURY, initially received authorization for its emergency use in hospitalized patients and this was followed by full approval in October. Monoclonal antibody treatments from Eli Lilly and Regeneron, among others, have started generating efficacy data. We are also on the cusp of seeing results from the first round of vaccines from large companies such as AstraZeneca, Pfizer (through partnership with BionTech), Johnnson & Johnson, Sanofi, and smaller companies such as Moderna utilizing newer technologies.

The first round of drugs and vaccines are largely driven by larger companies, however, a multitude of activities are underway across the development spectrum. Merck is developing an antiviral therapy, molnupiravir (MK-4482), through a license from a smaller company, Ridgeback—and this is in addition to its vaccine efforts that have entered clinical trials. Small immuno-oncology developer Corvus Pharmaceuticals (CRVS) is exploring CPI-006, a B cell modulatory, and anti-CD73 antibody to treat mild or moderately ill COVID-19 patients; and Incyte is in partnership with Novartis to explore its currently marketed hematology drug JAKAFI/JAKAVI (ruxolitinib) for COVID-19-related effects, to mention a few.

The urgency of Covid-19/SARS-CoV-2 drug development has led to a rapid marshalling of resources, highlighting the ability of the drug development industry to act swiftly and leverage relationships. As new technologies expand the boundaries of treatment across many diseases such as we are seeing today in oncology, perhaps there are lessons to be learnt from the current Covid-19/SARS-CoV-2 development experience which can be deployed more broadly.

This Privacy Policy applies only to our online activities and is valid for visitors to our website with regards to the information that they shared and/or collect in Ineedlocalmarketing. This policy is not applicable to any information collected offline or via channels other than this website.

If you contact us directly, we may receive additional information about you such as your name, email address, phone number, the contents of the message and/or attachments you may send us, and any other information you may choose to provide.

When you register for an Account, we may ask for your contact information, including items such as name, company name, address, email address, and telephone number.

How we use your information

We use the information we collect in various ways, including to:

Provide, operate, and maintain our webste

Improve, personalize, and expand our webste

Understand and analyze how you use our webste

Communicate with you, either directly or through one of our partners, including for customer service, to provide you with updates and other information relating to the webste, and for marketing and promotional purposes

Ineedlocalmarketing follows a standard procedure of using log files. These files log visitors when they visit websites. All hosting companies do this and a part of hosting services' analytics. The information collected by log files include internet protocol (IP) addresses, browser type, Internet Service Provider (ISP), date and time stamp, referring/exit pages, and possibly the number of clicks. These are not linked to any information that is personally identifiable. The purpose of the information is for analyzing trends, administering the site, tracking users' movement on the website, and gathering demographic information.

Like any other website, Ineedlocalmarketing uses 'cookies'. These cookies are used to store information including visitors' preferences, and the pages on the website that the visitor accessed or visited. The information is used to optimize the users' experience by customizing our web page content based on visitors' browser type and/or other information.